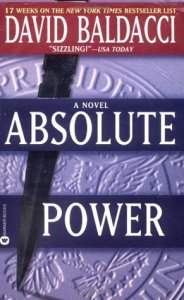 Blurb: ABSOLUTE CORRUPTION…In a heavily guarded mansion in a posh Virginia suburb, a man and a woman start to make love, trapping a burglar behind a secret wall. Then the passion turns deadly, and the witness is running into the night. Because what he has just seen is a brutal slaying involving the President of the United States.

ABSOLUTE DANGER…Luther Whitney is the career break-in artist who’s in the wrong place at the wrong time. Alan Richmond is the charming U.S. President with the power to commit any crime. And Jack Graham is the young attorney, caught in a vortex between the absolute truth – and …

ABSOLUTE POWER…A tale of greed, sex, ambition, and murder, this is the novel everyone has been talking about … the shattering, relentlessly suspenseful thriller that will change the way you think about Washington – and power – forever.

Review: I’ve had this one on my shelf for a few years now. I always like David Baldacci’s books, and this one sounded really interesting. The premise sounds so exciting! And it was his debut novel, so I figured it was something I should probably eventually read. And this is a heck of a good book.

My one and only complaint is the length of this book. It was about 100-150 pages too long. However, I understand why Mr. Baldacci set things up so meticulously in the beginning. There were quite a few places where the story seemed to drag on, but the last 200 or so pages were fast paced and action packed!

This book is a prime example of how good people end up doing bad things. Whether it’s to save their job, their life, their family. People will go to extraordinary measures to protect themselves and those that they love. This book shows just how far people will go for those reasons.