A Woman is No Man
by Etaf Rum 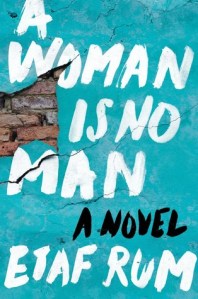 Blurb: Palestine, 1990. Seventeen-year-old Isra prefers reading books to entertaining this suitors her father has chosen for her. Her desires are irrelevant, however – over the course of a week, the naive and dreamy girl finds herself betrothed, then married, and soon living in Brooklyn. There Isra struggles to adapt to the expectations of her oppressive mother-in-law, Fareeda, and her strange new husband, Adam: a pressure that intensifies as she begins to have children – four daughters instead of the sons Isra is expected to bear.

Brooklyn, 2008. At her grandmother’s insistence, eighteen-year-old Deya must meet with potential husbands and prepare herself for marriage, though her only desire is to go to college. Her grandmother is firm on the matter, however: the only way to secure a worthy future for Deya is through marriage to the right man. But fate has a will of its own, and soon Deya will find herself on an unexpected path that leads her to shocking truths that will force her to question everything she thought she knew about her family, the past, and her own future.

Set in an America at once foreign to many and staggeringly close at hand, A Woman is No Man is a story of culture and honor, secrets and betrayals, love and violence. It is an intimate glimpse into a controlling and closed cultural world, and a universal tale about family and the ways silence and shame can destroy those we have sworn to protect.

Review: This book is AMAZING. It gave me all.the.feels. I’m so glad that I picked it up sooner rather than later, I had no idea what I was missing! And I’m definitely glad I didn’t miss this one.

When it came up as a Book of the Month club selection back in February I was hesitant. But to be honest, I didn’t feel like choosing the thriller selection that month – it feels like that’s all I pick from there. I wanted to branch out a little bit and for whatever reason this book really spoke to me. So I picked it. And then I let it sit. And sit. And sit some more. Fast forward to June when it just so happened to fit a Goodreads challenge callout that I had going I was nervous to pick it up but it was my best option for this particular callout. All I can say is thank goodness I gave it a shot!

I basically read this book in two sittings. The first 75 pages I read one night while letting my daughter watch her nightly iPad show before bed (don’t mom judge me!). I found it to be interesting but nothing spectacular at that point. It was reading easily enough. But then the next day I really didn’t want to pick it back. up. So I didn’t. But the next day I sat down with it for what I figured would be a few minutes with it. I ended up sitting there with it until I finished it. No joke! I NEVER do that. But I just couldn’t let the story go by that point. I had to know how it ended.

And whew. It’s a whirlwind of a book. There are so many emotions elicited. Anger. Disbelief. Sadness. Shock. I could go on and on. But this is kind of one of those books that I really think you have to read to fully comprehend. I could tell you the storyline but you have to feel this book to really get it. I could tell you all about it – but I think it’s best to just tell you to read it yourself. It’s an amazing book. And one that will undoubtedly be one of the best books I read in 2019.