One of these days I will learn to stay out of the bookstores, but I had a B&N gift card burning a hole in my pocket and couldn’t resist!

When Emily Page and her husband move from Manhattan to the wealthy enclave of Clairmont, Texas, she hopes she can finally escape her haunted past – and outrun the nameless stalker who has been taunting her for years. Pregnant with her first child, Emily just wants to start over. But as she is drawn into a nest of secretive Texas women – and into the unnerving company of their queen, Caroline Warwick – Emily finds that acceptance is a very dangerous game.

It isn’t long before Caroline mysteriously disappears and Emily is facing a rash of anonymous threats. Are they linked to the missing Caroline? Or to Emily’s terrifying encounter in college, years earlier? As the dark truth about Caroline emerges, Emily realizes that some secrets are impossible to hide – and that whoever came for Caroline is now coming for her.

London, 1940. Winston Churchill has just been sworn in, war rages across the Channel, and the threat of a Blitz looms larger by the day. But non of this deters Maggie Hope. She graduated at the top of her college class and possesses all the skills of the finest minds in British intelligence, but her gender qualifies her only to be the newest typist at No. 10 Downing Street. Her indefatigable spirit and remarkable gifts for code breaking, though, rival those of even the highest men in government, and Maggie finds that working for the prime minister affords her a level of clearance she could never have imagined – and opportunities she will not let pass. In troubled, deadly times, with air-raid sirens sending multitudes underground, access to the War Rooms also exposes Maggie to the machinations of a menacing faction determined to do whatever it takes to change the course of history.

And then I had one show up from Atria’s Galley Alley: 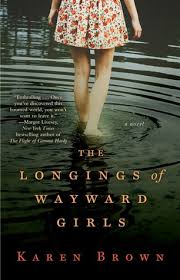 It’s an idyllic New England summer, and Sadie is a precocious only child on the edge of adolescence. It seems like July and August will pass lazily by, just as they have every year before. But one day, Sadie and her best friend play a seemingly harmless prank on a neighborhood girl. Soon after, that same little girl disappears from a backyard barbecue – and she is never seen again.

Twenty years pass, and Sadie is still living in the same quiet suburb. She’s married to a good man, has two beautiful children, and seems to have put her past behind her. But when a boy from her old neighborhood returns to town, the nightmares of that summer will begin to resurface, and its unsolved mysteries will finally become clear.