ABOUT THE BOOK – Angel Killer by P.J. Nunn 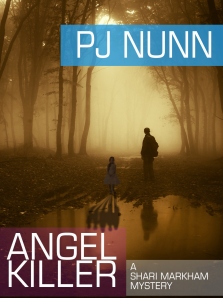 The death of a child is every mother’s nightmare.  But what if the child has no mother?  What if their little bodies are discarded like garbage and no one even seems to care that they’re gone?

Shari Markham, psychologist for the Dallas Police Department, knows what it feels like to be unclaimed and unwanted. She can’t turn away, even if it means demons dancing in her dreams at night.  But when her relentless pursuit of information to help apprehend this madman gets a little too close, he turns the tables, warning her that his next scheduled victim will be her own three-year-old granddaughter, Angel!

Purchase your copy at AMAZON

As with most things, PJ Nunn’s career started out as something else entirely. She started out in retail then moved to property management. That led to teaching high school, then serving as a counselor and liaison to the local police youth services division. She also spent five years as chairperson of the Coryell County Child Welfare Board and spent years counseling abuse victims and serving law enforcement as a trauma counselor and consultant (something she still does today). When she moved to Dallas, a family illness caused her to leave a job teaching psychology at Dallas County Community College District to become a freelance writer, but found that a few favors she was doing for friends—writing press releases and setting up book signings—was better suited to her talents and her drives.

In 1998, she founded BreakThrough Promotions, now a national public relations firm helping authors, mostly of mystery novels, publicize themselves and their work. The business is thriving and PJ is excited about the release of her first novel, Angel Killer. PJ lives with her husband some of their five children near Dallas, TX.

Learn more about PJ and her work at www.pjnunn.com.

Fog swirled around her, transforming everything into vague shapes and blurs. A small sigh escaped her as Shari parked her mocha Taurus next to the Grand Prairie squad car and got out. The sudden loss of heat prompted her to pull the front of her jacket closed against the damp air. Texas was never this cold in November. Sleep had been elusive. She’d just settled in when the jangling of the phone chased away warm, fuzzy dreams and replaced them with harsh, cold reality. Now the distant sound of thunder matched her mood and didn’t bode well for the crime scene. The sky, a creepy morning shadow with no delineation, met the ground while a fine mist settled on her without a single, discernible drop. Shari slammed the door and walked across the grass toward the officer securing the scene.

After more than a year as criminal profiler for the Dallas Police Department, she wondered if the time would ever come when she’d accept these early morning wakeup calls as typical rather than feeling as if she’d been thrown into a tornado. Emotional autopilot would kick in any minute though, separating her from the horrors to come and allowing her to function within the safe realm of clinical objectivity. At least that’s how it worked in theory.

“Morning,” she greeted the uniformed officer as he walked toward her, headed back to his squad car. He didn’t look any more cheerful than she felt. Nobody liked to work crimes against children.

I hope you will take the time to visit the other stops on the tour:

Friday, August 9 – Book Feature at Tales of a Book Addict

Wednesday, August 21 – Book Featured at Confessions of a Reader

Thursday, August 29 – Book Review at A Room Without Books is Empty