Dust and Shadow: An Account of the Ripper Killings by Dr. John H. Watson
by Lynsday Faye 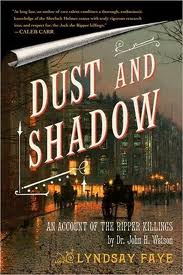 Blurb: From the gritty streets of nineteenth century London, the loyal and courageous Dr. Watson offers a tale unearthed after generations of lore: the harrowing story of Sherlock Holmes’s attempt to hunt down Jack the Ripper.

As England’s greatest specialist in criminal detection, Sherlock Holmes is unwavering in his quest to capture the killer responsible for terrifying London’s East End. He hires an “unfortunate” known as Mary Ann Monk, the friend of a fellow streetwalker who was one of the Ripper’s earliest victims; and he relies heavily on the steadfast and devoted Dr. John H. Watson. When Holmes himself is wounded in Whitechapel during an attempt to catch the savage monster, the popular press launches an investigation of his own, questioning the great detective’s role in the very crimes he is so fervently struggling to prevent. Stripped of his credibility, Holmes is left with no choice but to break every rule in the desperate race to find the madman known as “the Knife” before it is too late.

A masterly re-creation of history’s most diabolical villain, Lyndsay Faye’s debut brings unparalleled authenticity to the atmosphere of Whitechapel and London in the fledgling days of tabloid journalism and recalls the ideals evinced by Sir Arthur Conan Doyle’s most beloved and world-renowned characters. Jack the Ripper’s identity, still hotly debated around the world more than a century after his crimes were committed, remains a mystery ripe for speculation. Dust and Shadow explores the terrifying prospect of tracking a serial killer without the advantage of modern forensics, and the result is a lightning-paced novel brimming with historical detail that will keep you on the edge of your seat.

Review: I have signed up for a few challenges on some Goodreads groups this year, and one of the requirements in one of the challenges was to read an author debut. This is the book that I chose. It’s also been sitting on my shelf since 2009, when I received it from Paperbackswap….

Personally, I was hooked by “Jack the Ripper” and “Sherlock Holmes.” I mean, hello? Do I even have to explain any further than that?! To be completely honest, I’m not all that familiar with the Jack the Ripper case, except for the very bare bones (i.e. London, Whitechapel, 1880s, extremely vicious murders – literally, that’s the extent of my knowledge). I also never really read very many Sherlock Holmes stories. But that didn’t hamper my enjoyment of this very interesting historical fiction blend.

Overall, the book flows quite well. I felt like I was right there in London with Sherlock and Watson. Ms. Faye sets the scene effortlessly. She keeps it interesting without going too far to the side of gore that revolves around Jack the Ripper. I felt that she really had a great grasp of Sherlock’s “voice” too.

I enjoyed this one, a lot. I would definitely recommend it. It’s a fun book that has me wanting to know more about the Jack the Ripper case!