The Masque of a Murderer
by Susanna Calkins 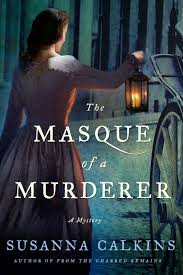 Blurb: In Susanna Calkins’s next richly drawn mystery set in 17th century England, Lucy Campion, formerly a ladies’ maid in the local magistrate’s household, has now found gainful employment as a printer’s apprentice. On a freezing winter afternoon in 1667, she accompanies the magistrate’s daughter, Sarah, to the home of a severely injured Quaker man to record his dying words, a common practice of the time. The man, having been trampled by a horse and cart the night before, only has a few hours left to live. Lucy scribbles down the Quaker man’s last utterances, but she’s unprepared for what he reveals to her—that someone deliberately pushed him into the path of the horse, because of a secret he had recently uncovered.

Fearful that Sarah might be traveling in the company of a murderer, Lucy feels compelled to seek the truth, with the help of the magistrate’s son, Adam, and the local constable. But delving into the dead man’s background might prove more dangerous than any of them had imagined.

In The Masque of a Murderer, Susanna Calkins has once again combined finely wrought characters, a richly detailed historical atmosphere, and a tightly-plotted mystery into a compelling read.

Review: I read and reviewed the first Lucy Campion book, A Murder at Rosamund’s Gate back in 2013. It was an impulse find on NetGalley that really ended up being a home run for me. Somehow I missed the release of the second Lucy Campion book, From the Charred Remains. It’s kind of a bummer, really. But I was approached by Ms. Calkins to consider the third Lucy book for review. I jumped on the opportunity. And am so glad that I did!

I really enjoyed this book. The pages just flew by. There’s something about Lucy’s character that really makes her easy to read. Even though this series is set in 17th century London, it definitely doesn’t read like that. It reads so conversationally. I remember liking that about the first novel as well.

Overall this book stands relatively well on its own. I would have preferred to have known what happened between books 1 and 2, and perhaps one day I will read From the Charred Remains. But, in reality, if you haven’t read any of these books before, it shouldn’t affect your enjoyment whatsoever.

I think what draws me to these books is the strong character that Lucy is. For 17th century London it’s truly amazing at what she does and gets away with. It’s not at all what I would ever picture for a woman during that time period, let alone a woman with such humble beginnings as Lucy. But that’s what makes her likable to me.

The storyline in this book was a lot of fun. I got a lot of enjoyment out of trying to figure out who the imposter was before Lucy (and no, I didn’t guess right). The writing is so easy to read. The characters are all so well-developed. And I cannot wait to find out what happens with the Lucy-Adam-Duncan angle!

It’s really just a great book, to be honest. And one that I would highly recommend. You don’t have to be a historical fiction aficionado to thoroughly enjoy this one. Definitely give it a try if possible!

Disclosure: I received an electronic copy of this book for free from the author in exchange for an honest review. All opinions expressed above are my own.