The Jefferson Key
by Steve Berry 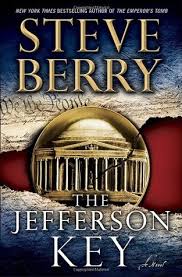 Blurb: Four presidents of the United States have been assassinated – in 1865, 1881, 1901, and 1963 – each murder seemingly unrelated. But what if those presidents were all killed for the same shocking reason: a clause contained in the United States Constitution? This is the question faced by former Justice Department operative Cotton Malone. When President Danny Daniels is nearly killed in the heart of Manhattan, Malone risks his life to foil the murder – only to find himself at odds with the Commonwealth, a secret society of pirates first assembled during the American Revolution. Racing across the nation and taking to the high seas, Malone and Cassiopeia Vitt must break a secret cipher originally possessed by Thomas Jefferson, unravel a mystery concocted by Andrew Jackson, and unearth a document forged by the Founding Fathers themselves – one powerful enough to make the Commonwealth unstoppable.

Review: The last Cotton Malone book in this series is actually one I ended up not finishing. It revolved around a Chinese storyline of some sort and I vaguely remember being heavily pregnant with Katelyn and just not interested. So I DNF’ed it. Seeing as how my daughter is over a year old now, it’s obviously been a while since I last met up with Cotton. I obviously missed something in the previous book (how Cotton and Cassiopeia ended up a couple), but overall that wasn’t really a big surprise.

So what did I think about this book? Well this is the first time Mr. Berry has set Cotton primarily in the United States. And I loved it. My one and only complaint is that it was over 500 pages – common for these books – but definitely tough on me personally as a reader these days. And while this is the 7th in the series, it stands well on its own, but I do highly recommend meeting Cotton from the beginning!

So overall … a good book, if rather long. Definitely recommended.