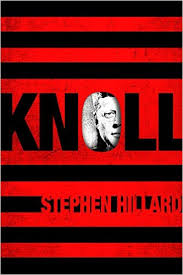 Blurb: Bus McIntyre, small-town lawyer and Sixties survivor, is presented with evidence from the cold-case murder of his father Dean, a hard-drinking cop, four decades ago. It reveals Dean’s ties to a dead Mafia kingpin – and the assassination of JFK. Meanwhile, Banner McCoy, a young NSA data analyst assigned to a project code-named KNOLL, goes into hiding when she learns its objective: eliminate anyone with information on what really happened in Dallas on November 22, 1963. When Bus falls into the agency’s sights, all paths lead to a small Louisiana town full of secrets, where the late don’s aged but indefatigable hit man awaits, determined to tie up all loose ends.

Review: If you have followed my blog for any time, you know by now that I am a sucker for anything JFK related. It’s a strange obsession I have. I gobble everything up about him, his life, his family, his presidency, his assassination, etc. So it was no surprise that when I was pitched this book I immediately jumped on the opportunity.

I will say that this book started out really slow for me. I had a hard time getting into the flow of the writing. It was a little bit of a strange start, really. But once I finally got into the book, I found it to be quite enjoyable.

Even so, without that “meat” I would have preferred a little more of, I still enjoyed this book. It was an interesting spin on the JFK assassination. I would definitely recommend this book to JFK junkies like myself as well as mystery fans.

I received a copy of this book for free in exchange for an honest review. All opinions are my own.