A Risk Worth Taking
by Brynn Kelly 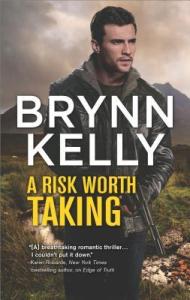 Blurb: He can’t outrun himself…

Legionnaire Jamie Armstrong lives in the shadows. A medic haunted by his mistakes, he knows better than to hope for redemption. But his latest mission brings a threat he doesn’t see coming—an attraction as irresistible as it is dangerous. Hacker Samira Desta is a woman he swore to forget, but as a key witness to a deadly conspiracy, Samira is his to protect.

After a year in hiding, Samira’s worst fears come true when her cover is blown and the unlikeliest of allies comes to her aid—the secretive Scot with whom she shared one unforgettable night. Hunted by lethal forces and losing the battle against their desire, Jamie and Samira make a desperate play to take the fight to their enemy—but those at greatest risk of ruin may be themselves…

Review: I received a copy of this book for free in exchange for an honest review. All opinions expressed are my own.

When I first accepted this book I knew it was part of a series, but was assured that it read well as a standalone. I’m not sure I can entirely agree with that. For a good chunk of the early part of the book I had trouble understanding what was going on. Why was Samira is hiding? What was she hiding from? Who was coming after her? There were a lot of references to something that had previously happened that I had no idea about. A little more background would have been helpful in my opinion.

I don’t read a lot of romantic suspense. So I was pleasantly surprised that there was a little more suspense than romance. I found it to be a really good balance for my personal tastes. But I fear that people who prefer more romance in their romantic suspense will not be as pleased.

Overall the book was an exciting and thrilling ride! The pacing was really good, it kept my attention throughout. My one and only complaint is that I felt I needed a little more background at the beginning of the book. It did finally come together, but a little more info would have been better. This was a good book and I look forward to reading more of Ms. Kelly’s books in the future!