This week I received two books that I ordered from Paperbackswap:

Spenser is heading for London – to track down a bunch of bombers who’d blown his client’s wife and kids away.

The plan: get one of the terrorists to play Judas Goat – to lead him to the others. Trouble is, he hadn’t counted on her being very blond, very beautiful, and very, very dangerous. 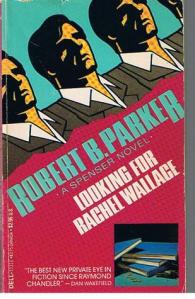 Rachel Wallace was a woman who wrote and spoke her mind. She made a lot of enemies – enemies who threatened her life.

Spenser was a tough guy with a macho code of honor, hired to protect a woman who thought that code was obsolete.

Privately, they would never see eye to eye. That’s why she fired him. But when Rachel vanished, Spenser would rattle skeletons in blue-blooded family closets, tangle with the Klan, and fight for her right to be exactly what she was. He was ready to lay his life on the line to find Rachel Wallace.