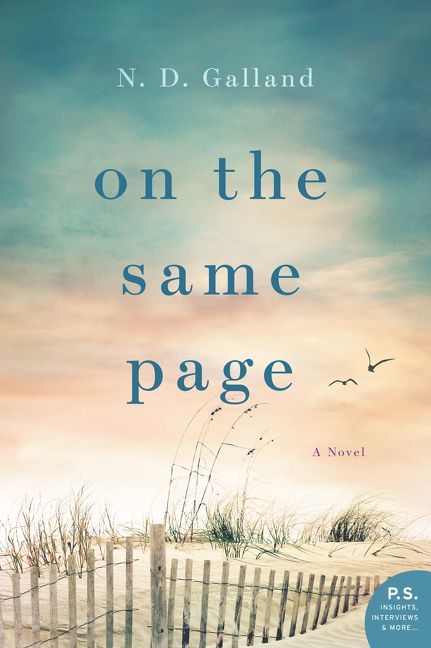 About On the Same Page

“N. D. Galland has created a delectable romantic comedy set in her home town of Martha’s Vineyard long after the summer crowds have departed.  With a satirist’s eye and a pitch-perfect ear for the social nuances of small-town life, it’s Pride and Prejudice for the Bumble generation.”

From the critically acclaimed author of Stepdog and The Fool’s Tale comes a romantic comedy that tells the story of one journalist secretly juggling two bylines for competing newspapers on a small island.

One island, two newspapers, and the reporter who played them both

Joanna Howes is a Martha’s Vineyard native who left the Island at eighteen and moved to New York City to become a writer. Now in her thirties, she reluctantly returns to care for her cranky, injured uncle. Needing income, she freelances for one island newspaper (the one Uncle Hank likes). But that doesn’t cover her bills, so she creates an alter ego to write for the rival paper (the one Uncle Hank doesn’t like).

The Vineyard has a split personality – part elite summer resort, part working-class small town. The Island’s two papers –the Journal and the Newes – are famously at odds with each other and reflect the seasonal schism in their reporting. Everybody’s shoulder seems to have a chip on it.

Joanna gets personally ensnared in a messy situation she’s assigned to write about for both papers: a wealthy seasonal resident sues the town for the right to use his private helicopter. When Johanna agrees to a cup of coffee with the witty, handsome stranger she meets at a zoning board meeting, she has no idea she’s made a date with Orion Smith, helicopter owner. Orion, meanwhile, doesn’t realize Joanna is the niece of his political nemesis, Henry Holmes.

Joanna scrambles to keep her disparate identities separate from each other in the tiny off-season community, but everything she does just gets her into deeper trouble…and further complicates her budding romance with the exasperating charmer she’s doing her best not to fall for.

A story about the half-truths we tell ourselves – and others – especially when our hearts are on the line.

“The most exciting story of skullduggery, intrigue and drama on Martha’s Vineyard since the last time Alan Dershowitz was snubbed at a cocktail party.”

— Peter Sagal, Host of NPR’s “Wait, Wait…Don’t Tell Me!” and author of The Incomplete Book of Running

“[A] gem of a novel. . . . this rollicking rom-com unfolds on Martha’s Vineyard, which has spun its own share of fables. Quick, somebody call Hollywood. This one is ready for the big screen.”

— Bob Drogin, author of Curveball: Spies, Lies and the Con Man Who Caused a War

So when I was originally pitched this book it immediately spoke to me mainly because of the main character being a journalist on Martha’s Vineyard. You see, when I was in high school I honestly thought that I would be going to J-School at Mizzou and would end up writing for a newspaper in a small coastal town (yep, that was really my dream). None of those things ultimately happened, but it was really my dream for quite a few years. So when I read the blurb of this book about a journalist on an island it really spoke to me!

Overall, I enjoyed the book well enough. However, I didn’t really care for how weak Joanna came across at times. For having the success as a writer in New York City that she did, I felt like she should have had a lot more confidence in herself than she did. I also really disliked Orion’s character. He was nothing but a bully and I just couldn’t get past that. The actual storyline was decent enough for me and it read quick and easily. The setting of Martha’s Vineyard was really enjoyable to me – I felt like Ms. Galland really got the feel of island life across to me the reader.

Overall a good book that is outside my comfort zone. It was strange to be reading what is  billed as a romantic comedy when the romance didn’t come into the picture for quite some time. I think that ultimately helped my personal opinion of this one (romance is definitely outside of my wheelhouse).

N. D. Galland is the author of the historical novels Godiva, I, Iago, Crossed, Revenge of the Rose, and The Fool’s Tale, as well as the contemporary romantic comedy Stepdog, and the New York Times bestselling near-future thriller The Rise and Fall of D.O.D.O. (with Neal Stephenson). She lives on Martha’s Vineyard.

1 thought on “Review: On the Same Page by N.D. Galland”