Kerra Bailey is a television journalist on the rise, and she’s hot on the trail of a story guaranteed to skyrocket her career to even greater heights: an interview with the legendary Major Trapper. Twenty-five years ago, The Major emerged a hero from the bombing of the Pegasus Hotel in downtown Dallas when he was photographed leading a handful of survivors out of the collapsing building. The iconic picture transformed him into a beloved national icon, in constant demand for speeches and interviews–until he suddenly dropped out of the public eye, shunning all members of the media. However, Kerra is willing to use any means necessary to get to The Major–even if she has to wrangle an introduction from his estranged son, former ATF agent John Trapper.

Still seething over his break with both the ATF and his father, John Trapper wants no association with the hotel bombing or his hero father, and spurns the meddling reporters determined to drag them back into the limelight. Yet Kerra’s sheer audacity and tantalizing hints that there’s more to the story rouse Trapper’s interest despite himself. And when her interview of a lifetime goes catastrophically awry–with unknown assailants targeting not only The Major, but also Kerra–Trapper realizes he needs her under wraps if he’s going to track down the gunmen before they strike again . . . as well as discover, finally, who was responsible for the Pegasus bombing.

Kerra is wary of a man so charming one moment and dangerous the next, and she knows Trapper is withholding evidence collected during his ATF investigation into the bombing. But having no one else to trust and enemies lurking closer than they know, Kerra and Trapper join forces and risk their very lives to expose a sinuous network of lies and conspiracy running deep through Texas–and uncover who would want a national hero dead. 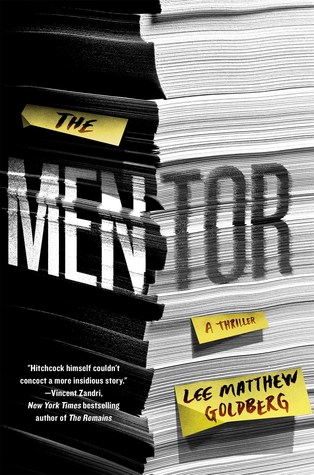 Kyle Broder has achieved his lifelong dream of becoming an editor at a major publishing house. When he’s contacted by his favorite college professor, William Lansing, Kyle couldn’t be happier, especially after William mentions that he’s been writing a novel. The idea of being his mentor’s editor is a dream come true.

But William’s manuscript is the most depraved story Kyle has ever read. After Kyle politely rejects the novel, William becomes obsessed, threatening Kyle’s career, his relationship with his girlfriend, and even his life. As Kyle delves into more of this psychopath’s work, it begins to resemble a cold case from his college town. William’s work is looking increasingly like a true-crime confession. One in which Kyle may just end up starring.