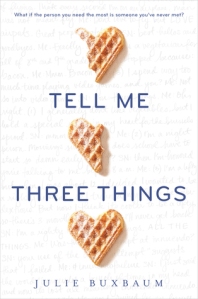 Blurb: What if the person you need the most is someone you’ve never met?

Everything about Jessie is wrong. At least, that’s what it feels like during her first week as a junior at her new ultra-intimidating prep school in Los Angeles. It’s been barely two years since her mother’s death, and because her father eloped with a woman he met online, Jessie has been forced to move across the country to live with her stepmonster and her pretentious teenage son.

Just when she’s thinking about hightailing it back to Chicago, she gets an email from a person calling themselves Somebody/Nobody (SN for short) offering to help her navigate the wilds of Wood Valley High School. Is it an elaborate hoax? Or can she rely on SN for some much-needed help?

In a leap of faith—or an act of complete desperation—Jessie begins to rely on SN, and SN quickly becomes her lifeline and closest ally. Jessie can’t help wanting to meet SN in person. But are some mysteries better left unsolved?

My mom once told me that the world is divided into two kinds of people: the ones who love their high school years and the ones who spend the next decade recovering from them. What doesn’t kill you makes you stronger, she said.

But something did kill her, and I’m not stronger. So go figure; maybe there’s a third kind of person: the ones who never recover from high school at all.

This book is the May selection in the Modern Mrs. Darcy book club. I thought it sounded like a decent read and I saw that I could get it in an e-book through my library. I figured if I didn’t like it after so many pages I’d just turn it back in and that would be that. But what I wasn’t expecting was to be really taken by this book! I don’t know why I say that – more often than not I really enjoy the books selected by Anne.

This book took me right back to high school. I personally didn’t have the greatest high school experience (I moved schools in 7th grade and the day I graduated high school I was still known as “the new girl” even though I had been there for over 5 years at that point). So I totally understood what Jessie was going through with that new school thing. I only wish I had had a “Somebody Nobody” to guide me through those early few days, weeks and months.

Enough reminiscing about high school, back to the book. I found it to be easily readable. And even though I am far removed from high school I still enjoyed the book. I was anxious to see who SN ended up being – and I had it totally pegged correctly. So while that part wasn’t necessarily a surprise, I personally thought the ending was just right.

It’s a cute book. I’m glad I gave it a shot. And I still find it amusing that every time I read a young adult I enjoy it – even though I never would have touched a young adult book when I was actually part of the target audience for that genre. It’s a fun and easy read. It’s really just a cute, sweet book. It didn’t feel fake – the teenage voices felt “real” to me. So yeah, I’d recommend it!