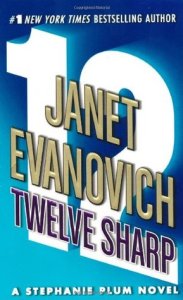 Blurb: While chasing down the usual cast of miscreants and weirdos, Stephanie discovers that a crazed woman is stalking her.

The woman dresses in black, carries a 9mm Glock, and has a bad attitude and a mysterious connection to dark and dangerous Carlos Manoso … street name, Ranger.

The action turns deadly serious, and Stephanie goes from hunting skips to hunting a murderer.

Ranger needs Stephanie for more reasons than he can say. And now, the two are working together to find a killer, rescue a missing child, and stop a lunatic from raising the body count. When Stephanie Plum and Ranger get too close for comfort, vice cop Joe Morelli (her on-again, off-again boyfriend) steps in. Will the ticking clock stop at the stroke of twelve … or will a stranger in the wind find a way to stop Stephanie Plum … forever?

Review: I won’t lie. These books are not much more than some brain candy – total fluff books. But they’re usually entertaining so I try and read 1 or 2 of them a year – much more than that and I burn out.

This particular installment I feel was a little better than the last few. First, Stephanie went an entire book without having her car blow up. That’s got to be the end of like an 8 book streak. And then we see Ranger having a lot more of a presence in this book. Rather than flitting in and out as he pleases he’s got quite a bit role in this book. It was interesting to see the book from his perspective, but I’m solidly in the Joe Morelli camp.

So overall an installment that didn’t necessarily leave me in stitches, but I wasn’t rolling my eyes either. Decent.