Okay, so I haven’t participated in Mailbox Monday in ages! I received quite a few books this past week, so I thought it would be a great time to start participating again! Here’s what arrived in my mailbox this week: 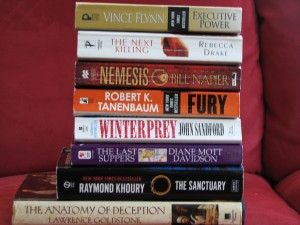 The Last Suppers by Diane Mott Davidson (trade with Barbara at MysteryBookSwap on Yahoo groups)
It should be the happiest day of Goldy’s life. The Colorado caterer is about to tie the knot with the man of her dreams, homicide detective Tom Schulz. But minutes before the ceremony is to begin, Tom phones with an urgent message: The wedding is off, and the reason is murder! Tom was on his way to the church when he stopped to pick up Father Olson – and found the rector shot and dying. Yet by the time Tom’s fellow officers arrive at the crime scene, Tom has disappeared, leaving behind a notebook that contains a cryptic message. Has the groom been abducted by the killer? Or has he gotten cold feet and walked out of Goldy’s life? For better or worse, Goldy needs to know the truth. So she puts her exquisitely decorated wedding cake on ice and begins to search for clues. What she quickly discovers is that her fiance’s life – and her future happiness – depend on her ability to deciper Tom’s note. For only it can lead her to an unsavory killer whose unholy passion may make Goldy a widow before she’s a wife.

The Next Killing by Rebecca Drake (PBS – used a credit)
For one hundred years, the best girls have come to St. Ursula’s Preparatory Academy to learn. To achieve. To make both memories and friends. But now, it’s where they also come to die… When the first body is found, the police call it an accident – an initiation ritual gone terribly wrong. But the students know something isn’t right at St. Ursula’s. There are sounds in the darkened corridors, a figure glimpsed between the trees, locked doors somehow opened. Someone is watching them, judging them, hating them … killing them … A twisted psychopath is turning the quiet campus into a school of fear. No sins will go unpunished. No girl will escape justice. And everyone will have a chance to join a serial killer’s exclusive club…

Executive Power by Vince Flynn (PBS Box-of-Books swap)
Returning from a covert mission, Mitch Rapp was publicly hailed by the president for his role in the fight against terrorism. After years of working in the shadows, Rapp was caught in the media spotlight – and marked for death by virtually every terrorist in the world. Now a CIA advisor, Rapp is ready to battle terror far from the front lines. But when a Navy SEAL team in the Philippines is ambushed, all evidence points to a leak within the U.S. State Department. And a greater threat lurks – a ruthless assassin working for the most powerful men in the Middle East, who are bent on igniting a world war. With the world watching, Rapp must hold back the flames of Armageddon…

The Anatomy of Deception by Lawrence Goldston (PBS – WL book)
In the morgue of a Philadelphia hospital, a group of physicians open a coffin and uncover the corpse of a beautiful young woman. What they see takes their breath away. Within days one of them strongly suspects that he knows the woman’s identity … and the horrifying events that led to her death. But in this richly atmospheric novel – an ingenious blend of history, suspense, and early forensic science – the most compelling chapter is yet to come, as young Ephraim Carroll is plunged into a maze of murder, secrets, and unimaginable crimes … Dr. Ephraim Carroll came to Philadelphia to study with a leading professor, the brilliant William Osler, believing that he would gain the power to save countless lives. As America hurtles toward a new century, medicine is changing rapidly, in part due to the legalization of autopsy – a crime only a few years before. But Carroll and his mentor are at odds over what they glimpsed that morning in the hospital’s Dead House. And when a second mysterious death is determined to have been a ruthless murder, Carroll can feel the darkness gathering around him – and he ignites an investigation of his own. Soon he is moving between the realm of elite medicine, Philadelphia high society, and a teeming badlands of criminality and sexual depravity along the city’s fetid waterfront. With a wealthy, seductive woman clouding his vision, the controversial artist Thomas Eakins sowing scandal, and the secrets of the nation’s powerful surgeons unraveling around him, Carroll is forced to confront an agonizing moral choice – between exposing a killer, undoing a wrong, and, quite possibly, protecting the future of medicine itself.

The Sanctuary by Raymond Khoury (PBS Box-of-Books swap)
Portugal, 1705: In the dungeons of a Templar castle, a dying old man bequeaths an ancient half-burned book to his young inquisitor. Keeping one step ahead of those who would kill to wrench the book’s secret from his hands, the inquisitor turns his back on his calling and sets off on an impossible journey to complete the old man’s quest.
Baghdad, 2003: Hunting for a mysterious bioweapons scientist, an army unit discovers a concealed state-of-the-art lab where gruesome experiments have been carried out on men, women, and children. The scientist escapes, but a puzzling clue is left behind: a circular symbol of a snake feeding on its own tail.
As the power of the symbol comes to light, revealing centuries of destruction left in its wake, one unsuspecting woman stands at the center of a conspiracy that could change the world forever…

Nemesis by Bill Napier (PBS Box-of-Books swap)
From a remote Scottish mountain, Dr. Oliver Webb – one of the world’s great physicists – is whisked away by a military helicopter and routed to the Mexican border. Along with the leading men of physics and one sexy atom smasher, Webb is given an impossible task: identify the asteroid – codename Nemesis – that is on course to collide with and destroy America. They have five days to stop it. If they can’t, the President will strike first by ordering the U.S. military to pull the nuclear trigger…
But when one of Webb’s colleagues is found dead, he has every reason to suspect that there is more to Nemesis than he knows. Then, he makes a staggering discovery: the secret to saving the world is hidden in a 17th century Latin manuscript that has gone mysteriously missing.
An electrifying race against time, Nemesis spans centuries and the globe in a white-hot journey through physics, history, geopolitics – and mankind’s ultimate duel with the unknown.

Winter Prey by John Sandford (trade with Barbara at MysteryBookSwap on Yahoo groups)
The Iceman crept up to the house on the edge of the lake. He killed the father first. Then the mother and child. And when his work was done, he set the house on fire…. Lucas Davenport had tracked killers in cities across America. But the woods of rural Wisconsin are as dark and primal as evil itself. The winters are harsher and colder. And in the heart of every mother and father there is fear… Because tonight, the Iceman cometh.

Fury by Robert K. Tanenbaum (PBS Box-of-Books swap)
In Brooklyn, a female jogger is brutally raped; the assailants are convicted and later exonerated by the Kings County DA. Now the guilty are filing a multimillion-dollar lawsuit against the city of New York, the police, and the two Brooklyn Assistant DAs who tried the case. Caught int he glare of the media-frenzy, Butch Karp may be blinded to the lethal maneuverings of a terrorits cell plotting to bring the city to its knees by striking Times Square on New Year’s Eve. But the destruction begins far below ground, in the subway system – where Karp’s familiy may become their first victims…