Mailbox Monday is on tour with June’s stop being at Burton Book Review.

Wow, it’s been forever since I posted a Mailbox Monday post! Actually when I looked back I hadn’t posted one since January! Of course I haven’t received all that many books this year (not like last year, where I went absolutely book bonkers!) Anyway, I got 4 books this week:

It’s the spring of 1939, and the prospect of war in Europe looms large. The United States has no intelligence service. In Washington, D.C., President Franklin Roosevelt may run for an unprecedented third term and needs someone he can trust to find out what the Nazis are up to. His choice: John F. Kennedy.
It’s a surprising selection. At twenty-two, Jack Kennedy is the attractive but unpromising second son of Joseph P. Kennedy, Roosevelt’s ambassador to Britain (and occasional political adversary). When Jack decides to travel through Europe to gather research for his Harvard senior thesis, Roosevelt takes the opportunity to use him as his personal spy. The president’s goal: to stop the flow of German money that has been flooding the United States to buy the 1940 election – an election that Adolf Hitler intends for Roosevelt to lose.

From a Paperbackswap Box-of-Books trade:

Nearly five centuries ago a fleet of boats landed mysteriously on an island in an inland sea. There, an ancient Andean people hid a golden hoard greater than that of any pharaoh, then they and their treasure vanished into history – until now.
1998, the Andes Mountains of Peru. Dirk Pitt dives into an ancient sacrificial pool, saving two American archaeologists from certain drowning. But his death-defying rescue is only the beginning, as it draws the intrepid Pitt into a vortex of darkness and danger, corruption and betrayal. A sinister crime syndicate has traced the long-lost treasure – worth almost a billion dollars – from the Andes to the banks of a hidden underground river flowing beneath a Mexican desert. Driven by burning greed and a ruthless bloodlust, the syndicate is racing to seize the golden prize … and to terminate the one man who can stop them: Dirk Pitt! 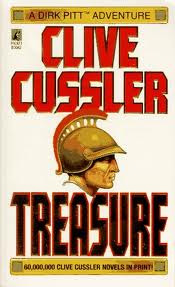 Charts of lost gold … breathtaking art and rare volumes … maps of hidden oil and mineral deposits that could change the world’s balance of power. Now Dirk Pitt has discovered the secret trail of the treasures of Alexandria – a trail that plunges him into a brutal conspiracy for total domination of the globe. Zealots threaten to unseat the governments of Egypt and Mexico, exposing America to invasion and economic collapse. Suddenly, from East to West, anarchists reach their deadly tentacles into the heart of the United States. And Dirk Pitt is up against the most feared assassin known to man. An international band of terrorists is making its play for world power on the high seas – and Pitt is the only man alive who can stop them!

In prison, they call her the Sculptress for the strange figurines she carves – symbols of the day she hacked her mother and sister to pieces and reassembled them in a blood-drenched jigsaw. Sullen, menacing, grotesquely fat, Olive Martin is burned-out journalist Rosalind Leigh’s only hope of getting a new book published.
But as she interviews Olive, in her cell, Roz finds flaws in the Sculptress’s confession. Is she really guilty as she insists? Drawn into Olive’s world of obsessional lies and love, nothing can stop Roz’s pursuit of the chilling, convoluted truth. Not the tidy suburbanites who’d rather forget the murders, not a volatile ex-policeman and her own erotic response to him, not an attack on her life.