Meet James Annesley, son of 18th Century Ireland. Though you may have never heard his name before, his story has already touched you in profound ways. Now, for the first time, novelist David Marlett brings that incredible story to life.

Stretching from the dirty streets of Ireland to the endless possibilities of Colonial America, from drama on the high seas with the Royal Navy to a life-and-death race across England and up the Scottish Highlands, from the prospect of a hangman’s noose to a fate decided in the halls of justice, Fortunate Son is a powerful, relentless epic. Here nobility, duels, love, courage, revenge, honor, and treachery among family, friends and ancient enemies abound. And at its center is the most momentous trial in Irish history – the trial of Annesley v. Anglesea from which our modern “attorney/client privilege” was forged, and our concept of a “jury of one’s peers” was put to the test.

Carefully researched, vividly evoked, and lovingly brought to the page, Fortunate Son is an unforgettable work of fiction based on fact, one that will resonate deep within you long after you finish it. 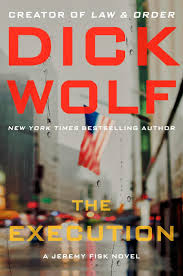 A number of bodies are discovered on the United States’ border with Mexico, each carved with a bizarre symbol: a hummingbird. Detective Cecilia Garza – dubbed the Ice Queen among her colleagues at the Mexican intelligence agency because she’s famous for never showing an ounce of weakness – arrives at the scene and recognizes the image immediately; it is the calling card of a killer called Chuparosa, a man both feared and celebrated for his cunning and brutality. Known to be incorruptible in a seemingly lawless land, Detective Garza has pursued this killer for years, yet knows little about him, except that he’s merciless and heading to New York City – along with the rest of the world.

It’s United Nations Week in Manhattan and Jeremy Fisk – an integral member of the NYPD’s Intelligence Division, an antiterror unit modeled on the CIA – can’t let his grief over a devastating loss keep him from his duty to safeguard the city and the world’s most powerful leaders. Complicating matters is the startling news of a mass murder on the beach in nearby Rockaway – and the arrival of a beautiful and assertive Mexican detective determined to do things her way.

To have a chance at finding and stopping Chuparosa, these uneasy allies must meld their opposing investigative styles. They soon discover that there’s much more to this threat than meets the eye – and Fisk will have to learn the hard way that justice is not always blind.