The Butcher
by Jennifer Hillier 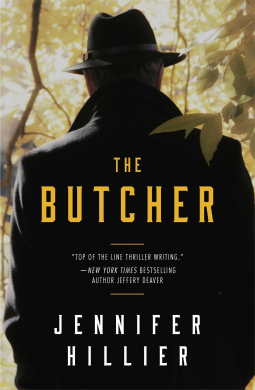 Blurb: From the author of the acclaimed suspense novels Creep and Freak and whom Jeffery Deaver has praised as a “top of the line thriller writer,” The Butcher is a high-octane novel about lethal secrets that refuse to die—until they kill again.

A rash of grisly serial murders plagued Seattle until the infamous “Beacon Hill Butcher” was finally hunted down and killed by police chief Edward Shank in 1985. Now, some thirty years later, Shank, retired and widowed, is giving up his large rambling Victorian house to his grandson Matt, whom he helped raise.

Settling back into his childhood home and doing some renovations in the backyard to make the house feel like his own, Matt, a young up-and-coming chef and restaurateur, stumbles upon a locked crate he’s never seen before. Curious, he picks the padlock and makes a discovery so gruesome it will forever haunt him… Faced with this deep dark family secret, Matt must decide whether to keep what he knows buried in the past, go to the police, or take matters into his own hands.

Meanwhile Matt’s girlfriend, Sam, has always suspected that her mother was murdered by the Beacon Hill Butcher—two years after the supposed Butcher was gunned down. As she pursues leads that will prove her right, Sam heads right into the path of Matt’s terrible secret.

A thriller with taut, fast-paced suspense, and twists around every corner, The Butcher will keep you guessing until the bitter, bloody end.

Review: I received a copy of this book for free via NetGalley, all opinions expressed below are my own.

I first saw this book mentioned in a NetGalley email and was immediately intrigued. So I requested access and was glad to snag an e-galley.

This one is a tough one to describe. Here’s the deal: you know exactly who the Butcher is within the first chapter. I’m not entirely sure I liked that strategy. Nothing … and I mean nothing was a surprise in this book. I hate to use this word, but it was so predictable. That’s why I can’t rate it higher than a 3.

Overall it was a good book in general. I would recommend it, but if you like a lot of twists and turns, this one might not be for you. But it does read quickly and easily and kept me quite entertained.