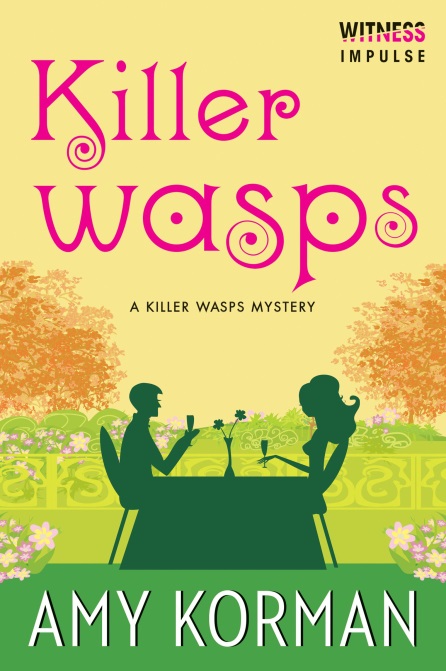 Crime really stings in Killer WASPs (Witness Impulse e-book, on sale 9/16/2014, $1.99), a Witness Original from debut author Amy Korman. If you love cocktails, antiquing, parties, shopping and the occasional crime-lite thrown in amid vodka tonics and tennis matches at the club, then you’ll love Killer WASPs. The first installment in this modern and cozy series features crime, romance, and fun amid the classic estates of Philadelphia’s Main Line.

Bryn Mawr, Pennsylvania, is a haven for East Coast WASPs, where tennis tournaments and cocktails at the club are revered traditions. Little happens in the sleepy suburb, and that is the way the Lilly Pulitzer–clad residents prefer it. So when antiques store owner Kristin Clark and her portly basset hound stumble upon the area’s newest real estate developer lying unconscious beneath the hydrangea bushes lining the driveway of one of Bryn Mawr’s most distinguished estates, the entire town is abuzz with gossip and intrigue.

When the attacker strikes again just days later, Kristin and her three best friends—Holly, a glamorous chicken nugget heiress with a penchant for high fashion; Joe, a decorator who’s determined to land his own HGTV show; and Bootsie, a preppy but nosy newspaper reporter—join forces to solve the crime. While their investigation takes them to cocktail parties, flea markets, and the country club, they must unravel the mystery before the assailant claims another victim.

About the Author: Amy Korman is a former senior editor and staff writer for Philadelphia Magazine, and author of Frommer’s Guide to Philadelphia. She has written for Town & Country, House Beautiful, Men’s Health, and Cosmopolitan. Killer WASPS is her first novel.

About Witness:  Witness is the new Impulse imprint from HarperCollins Publishers devoted to thrillers, mysteries, and stories of suspense. Debuting in Fall 2013, Witness will serve as a launch pad for a range of exciting titles, including new publications, previously self-published bestsellers, newly digitized backlist classics, and international books previously unavailable in the US.  For more on this and other Witness titles, please visit http://wmmorrow.hc.com/witnessimpulse