A slim mailbox this week (which is a good thing). For a blog tour at the end of August: 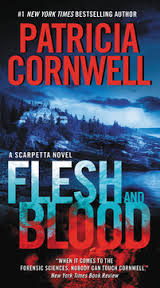 Dr. Kay Scarpetta is about to head to Miami for a vacation when she notices seven pennies on a wall behind their home. Is this a kids’ game? If so, why are all of the coins dated 1981 and so shiny they could be newly minted? Then she learns there’s been a homicide five minutes away. A high school teacher was shot with uncanny precision as he unloaded groceries from his car. Yet no one heard or saw a thing.

Soon more victims surface. The shots seem impossible to achieve, yet they are so perfect they cause death in an instant. There is no pattern to indicate where the killer will strike next. First it was New Jersey, then Massachusetts, and then the murky depths off the coast. There she comes face to face with shocking news that implicates her niece, Lucy – Scarpetta’s own flesh and blood.

Also, as part of this blog tour, I received a copy of Karin Slaughter’s Blindsighted. However, I read this one back in 2013 and would be happy to send this brand new copy to the first person to request it in the comments (leave your email). 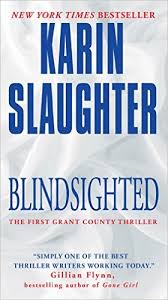 A small Georgia town erupts in panic when a young college professor is found brutally mutilated in the local diner. But it’s only when town pediatrician and coroner Sara Linton does the autopsy that the full extent of the killer’s twisted work becomes clear.

Sara’s ex-husband, police chief Jeffrey Tolliver, leads the investigation – a trail of terror that grows increasingly macabre when another local woman is found crucified a few days later. But he’s got more than a sadistic serial killer on his hands, for the country’s sole female detective, Lena Adams – the first victim’s sister – wants to serve her own justice.

Yet it is Sara who holds the key to finding the killer. A secret from her past could unmask the brilliantly malevolent psychopath … or mean her death.

And for review in September: 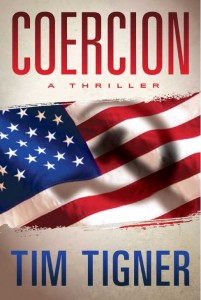 After the Iron Curtain’s collapse, Russia appears to be finished as a superpower. But KGB general Vasily Karpov is working behind the scenes to restore Russia’s status by forcing Americans into traitorous acts of espionage and sabotage, with the aid of a new secret weapon. Meanwhile, the biggest target is within Russia, where Karpov is plotting to capture the Kremlin for himself.

Former US soldier and spy Alex Ferris becomes the first to fathom Karpov’s grand plans. Racing from San Francisco to Siberia, Alex must elude ambushes, assassins, and death from exposure as he wages a one-man war against a growing global threat and the resurgence of the Soviets.