The Widows of Malabar Hill
by Sujata Massey 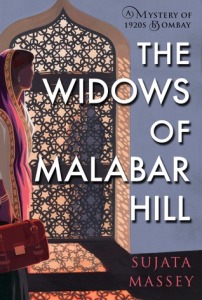 Blurb: Perveen Mistry, the daughter of a respected Zoroastrian family, has just joined her father’s law firm, becoming one of the first female lawyers in India. Armed with a legal education from Oxford, Perveen also has a tragic personal history that makes women’s legal rights especially important to her.

Mistry Law has been appointed to execute the will of Mr. Omar Farid, a wealthy Muslim mill owner who has left three widows behind. But as Perveen examines the paperwork, she notices something strange: all three of the wives have signed over their full inheritance to a charity. What will they live on? Perveen is suspicious, especially since one of the widows has signed her form with an X – meaning she probably couldn’t even read the document. The Farid widows live in full purdah – in strict seclusion, never leaving the women’s quarters or speaking to any men. Are they being taken advantage of by an unscrupulous guardian? Perveen tries to investigate, and realizes her instincts were correct when tensions escalate to murder. Now it is her responsibility to figure out what really happened on Malabar Hill, and to ensure that no innocent women or children are in further dance.

Review: This is the July selection in the Modern Mrs. Darcy book club. I was initially a little hesitant to pick it up because of the setting. I don’t think I’ve ever read anything set in India and my knowledge of India and their customs are very limited, so I was unsure how I would take to this book. I can fully say that I am thrilled that I gave this one a shot! I thoroughly enjoyed it!

I absolutely adored Perveen’s character. She was so strong and I just loved her. I obviously do not want to say too much about the book here and spoil it, but there was one defining moment in this book that was really the turning point for me. Perveen stood up and did something for herself that had me literally wanting to dance across the room in jubilation. It was at that point that I realized just what kind of character Perveen was – and she’s definitely one that I hope we continue to see in future series installments! As a woman, I loved everything that Perveen stood for. Sure she made some boneheaded moves at times (who doesn’t?), but for the most part she was level-headed and intelligent. Just a well-written, well-developed character!

I actually enjoyed learning a little bit more about the culture of India, especially what women have to endure at times. As a woman in America, I am used to certain liberties that women in other countries are not allowed. I find it hard to fathom this, but I also understand cultural customs. I found it to be quite educational.

Overall this is a book that I never would have picked up by myself. I took a chance on it and am so glad that I did. I highly recommend this book to mystery lovers and historical fiction lovers alike. It’s a well-written and entertaining book. It was easy to read and enjoyable. I thoroughly enjoyed it.