A Vision of Murder
by Victoria Laurie 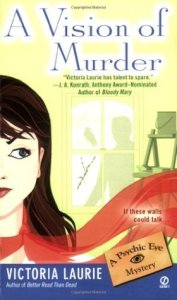 Blurb: When Abby gets roped into investing in a fixer-upper, she has no idea she’ll go from real estate mogul to real-life ghostbuster. After the deal is closed, phantom inhabitants of the house replay a violent night from long ago that ended in the murder of a beautiful blonde. The only way to evict the house’s spectral tenants – and save Abby’s handyman from flying drills – is to uncover the dead woman’s identity and solve her murder.

Aided by her boyfriend, sexy FBI agent Dutch Rivers, Abby discovers the key to the puzzle is a hidden treasure lost since World War II. Unfortunately, Abby’s not the only one intent on finding it. As she gets closer to the truth, a madman shadows her every move. Now a race is on to find the treasure and solve the mystery – and only the winner will survive…

Review: This is the 3rd book in the Abby Cooper Psychic Eye series. I had read and enjoyed the first two so much that I immediately ordered the next three from Paperbackswap … but then I let them just sit. So I was glad when this one came up for a call-out on a Goodreads challenge! I was ready to get back in with Abby and see what kind of trouble she found herself in this time.

Overall I’m a little conflicted on this one. I enjoyed it for the most part, but I didn’t really care for the overall storyline – with the World War II hidden treasure and ghosts. That just didn’t work for me, but paranormal can be very hit or miss with me. So it’s not surprising that the storyline wasn’t necessarily my cup of tea.

I also noticed how angry Abby seemed to be in this one. At times I felt like she was purposefully ticking off Dutch, her boyfriend. It just got to be repetitive and annoying. I can understand that things didn’t go as planned with their planned vacation and then there was a lot of togetherness. But if they intend to have a future together, they’re going to have to figure out how to live with each other a little bit better.

So while this one wasn’t necessarily my favorite so far, I’m still looking forward to getting to the 4th book in the future!