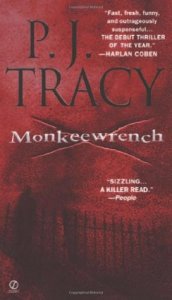 Blurb: People are dying for the new computer game by the software company Monkeewrench. Literally. With Serial Killer Detective in limited release, the real-life murders of a jogger and a young woman have already mimicked the first two scenarios in the game.

But Grace McBride and her eccentric Monkeewrench partners are caught in a vise. If they tell the Minneapolis police of the link between their game and the murders, they’ll shine a spotlight on the past they thought they had erased – and the horror they thought they’d left behind. If they don’t, eighteen more people will die…

Review: This is the first book in the Monkeewrench series. I have had this one on my shelf for quite some time so I was excited to finally get to it.

For the most part I enjoyed it. But it had a pretty slow start for me. I’m not sure exactly why, but I struggled to get to the halfway point. I think it was the bouncing back and forth between two distinct storylines that kind of held me up. They were completely different and I had no idea what on earth was going to tie this two plot lines together. But then it finally came together as to what the connection was. And from that point on it was a race to the finish to find out exactly what had happened and why.

I am on the fence about whether or not I want to continue on with this series or not. Part of my issue is that this one felt like a standalone, the storyline wrapped up nicely. I assume it’s because this book was not written with the intention of being the first in a series.

Either way this particular book was enjoyable enough. Once you get past that slow start the book itself is enjoyable and I liked it.