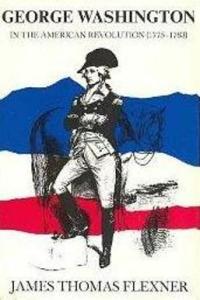 Blurb: History has blinded us to the all-too-human character of George Washington; in doing so, it has blinded us to the true nature of his greatness. We have urgent need to know this man we call the Father of Our Country. And now, at last, James Thomas Flexner has given us the biography that fully meets our need.

In George Washington in the American Revolution (1775-1783), we are witness to eight fateful years, as Washington lived them day by day and month by month. We see a Virginia officer catapulted – despite his obvious military limitations and his own protestations of inadequacy – into the command of an amateur army opposing an experienced European force under elite leadership. The fact that Washington was at first out-generated is not suppressed. His failures and reverses are not diminished or excused.

Yet even as we share the anguish of his unsuccessful battles – and the political unrest and uncertainty that marked the Revolution – we understand the slow but sure process by which Washington taught himself, through trial and error, to become the clear master of his English foes.

As James Thomas Flexner so brilliantly demonstrates, Washington’s command of the Continental Army was deeply marked by the extremes of his own complex personality: his compassion and his towering rages; his short-term pessimism and his abiding belief in the virtue of the American cause. By turns indiscreet, impulsive, and artfully dissembling, the General’s ruling mood was – as his wife Martha wrote – unhappiness: the troubled mind of a civilian in uniform, yearning for Mount Vernon, for his hearth and home.

When the war ended, it was as a civilian, too, not as a man of war or bloodshed, that Washington risked his personal leadership to turn back a movement that might well have (as has so often happened in history) resulted in a kind of fascism as cruel as the tyranny which it would have replaced.

To read George Washington in the American Revolution is to be in the vital presence of human aspiration and to enter into a drama of transcended interest and excitement. This is the story of America’s great hero revealed as all the greater because his human faults and foibles have not been denied their rightful place in the record of his leadership.

Review: This is the second book in Mr. Flexner’s four-book series on George Washington. I knew going into this one that I would struggle with it. I do not like to read about battles and wars, so I knew that the mere fact that this entire volume revolved around the American Revolution was going to slow me down. However, I didn’t anticipate it to take me 4 months to finish it either. And to be honest, near the end, I was definitely  skimming. I just couldn’t make myself sit down and read much at a time.

That’s not to say that the book wasn’t well written, because it most certainly was. The writing was easy to read. It’s just that my interest was not there for the subject matter. I didn’t really want or need such a detailed account of the American Revolution. I know that this time period is crucial to understanding who George Washington was, as a person and an American. However, it just ended up not being my cup of tea.

I am definitely looking forward to moving on from here in this series. Mr. Flexner definitely has a writing style that I find enjoyable. Hist attention to detail and research is superb. And while I’m sure that in the end this particular installment will be the “weakest” of the four books for me personally, it certainly is a good book.