Okay, so usually I post individually for the challenges I’m signing up for. This year, I’m just going to do one post.

I have found four challenges for 2013.

So I participated in the 2012 version of the Eclectic Reader Challenge – I failed at it, too. I decided to give it another go in 2013. The categories are different, so this ought to be fun.

So I’ll be honest here – there are a few I know I’m going to struggle with (Urban Fantasy/Dystopian/LGBT) but who knows – maybe I’ll make it. 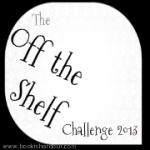 Once again, this is another challenge that I participated in for 2012. And another one that I failed. The idea is to read books that have been on your shelves prior to 2013.

I have plenty of choices on my shelves, lol.

Okay – so how many times have I read the first book in a series, only to have not (for whatever reason) moved on to book #2? Too many to count. That’s why this challenge is so perfect for me 🙂

The goal – read as many books after the first in a series that you choose.

I think I want to read at least 5-7 sequels.

And the final one that I’m signing up for – What’s in a Name 6. I participated in this challenge when Annie was still hosting it but haven’t signed up the last couple of years. I decided to take the plunge again this year. Here’s the categories: