Catering to Nobody
by Diane Mott Davidson

First Line: Catering a wake was not my idea of fun.

Blurb: Catering the wake of her son’s favorite teacher is not Goldy’s idea of fun, especially when her former father-in-law is nearly killed by a cup of poison-laced coffee. Investigating officer Tom Schulz, though smitten with Goldy and her food, is forced to shut down her business – forcing Goldy to root out the person responsible for attempted murder. As Goldy follows the wicked recipe to its logical conclusion, she discovers some very unsavory ingredients flavoring the neighborhood – and poisoning her own family with the bitter taste of deceit and revenge…

Review: This is the first in the Goldy Schulz series. I do not read a lot of cozy books. However, I wanted something fun to read after getting bogged down with a DNF book. So I picked this book up. I really enjoyed it! I like Goldy as a character – she’s likeable and believable. I found the storyline to be interesting, I only had one part of it figured out at the end. And to be completely honest, I don’t even know how Goldy figured out the other part of it! I must have missed some clues somewhere, because it was a surprise to me. I am a serial series reader, so I’ve already picked up the second in this series to begin reading. I’m sure I’m like the last person on the planet to pick up this book and start this series, but I would definitely recommend this book to anyone who likes a good mystery.

Sharing a funny paragraph that made me laugh out loud:

The phone rang again. Alicia couldn’t come: she’d had a blow out on I-70. Her load of pumpkins had exploded like grenades when they hit the concrete. Two dozen cars had spun out in orange slime … no one was hurt … the road was closed so it could be cleaned … traffic had backed up for six miles. With significant understatement, she added, “You can’t imagine the mess.”

I can’t not say something. There’s been rumblings about a certain blog post on a certain author’s blog about certain “unprofessional” bloggers. I don’t want to get too involved in this entire thing, however, I think that the name calling and royalty check reference might have been slightly unprofessional. Just sayin’. Now, this particular author does not write books that I am necessarily interested in, so I can’t say anything about her books. However, I can say that I now know her name and will never give her any of my money.

I think that’s all I intend to write about this whole topic.

Tara – who is off to write her grocery list (oh, and a book review, too).

Mailbox Monday is still on tour, with February’s spot being at Library of Clean Reads.

This week I only had one book come into my mailbox (pretty much a good thing judging by the state of my bookshelves!) Here’s what came:

Lieutenant Davenport’s sanity was nearly shattered by two murder investigations. Now he faces something worse … Two killers. One hideously scarred. The other strikingly handsome, a master manipulator fascinated with all aspects of death. The dark mirror of Davenport’s soul … This is the case that will bring Davenport back to life. Or push him over the edge.

A Reliable Wife
by Robert Goolrick

Blurb: He placed a notice in a Chicago paper, an advertisement for a “reliable wife.” She responded, saying that she was “a simple, honest woman.” She was, of course, anything but honest, and the only simple thing about her was her single-minded determination to marry this man and then kill him, slowly and carefully, leaving herself a wealthy widow. What Catherine Land did not realize was that the enigmatic and lonely Ralph Truitt had a plan of his own.

I wanted to love this book. So bad. And I couldn’t even get through it.  290 pages and I could only (barely) tolerate 100. I’m still kind of curious to know what happens in the end of this book, but not curious enough to suffer my way through the rest of this book. The characters are unlikable, the writing is way too lyrical for my taste, and it’s overall just boring. I searched for some other blogger book reviews for this book and noticed that people either loved or hated this book. Unfortunately, I am on the negative side in my opinion on this book.

This week my reading has been hit or miss. I was able to finish Divine Justice by David Baldacci. I really enjoyed it – it will be interesting to read the most recent installment of this series (Hell’s Corner) in the coming months. Now I’ve started reading A Reliable Wife by Robert Goolrick. I’m only about 50 pages into it, and it’s been good so far, but it’s much slower reading than what I’m really used to.

I met my brother-in-law’s new girlfriend this week, she’s really nice and I think she’ll be really good for him …. but I don’t really like that we have the same first name – talk about awkward depending on how far this relationship goes…

Anyways, here’s what happened here on the blog this week:

I was spotlighted on Jackie’s blog on Tuesday.

I also talked about:

So that’s all I’ve got for right now. I hope that this coming week is a good one, but it’s going to be busy for me at work (I’ve got payables on the same day as my payroll, yuck!). But there’s some snow in the forecast – even though we’ve been lucky and have missed most of the really heavy stuff – so I kind of hope for a snow day this week, hehe!

Blurb: Known by his alias, “Oliver Stone,” John Carr is the most wanted man in America. With two pulls of the trigger, the men who destroyed Stone’s life and kept him in the shadows were finally silenced. But his freedom comes at a steep price: The assassinations he carried out prompt the highest levels of the U.S. government to unleash a massive manhunt. Yet behind the scenes, master spy Macklin Hayes is playing a very personal game of cat and mouse. He, more than anyone else, wants John Carr dead. With their friend and unofficial leader in hiding, the members of the Camel Club risk everything to save him. Now as the hunters close in, Stone’s flight from the demons of his past will take him from the power corridors of Washington, D.C., to the coal-mining town of Divine, Virginia – and into a world every bit as bloody and lethal as the one he left behind.

Review: SPOILERS POSSIBLE. This is the fourth book in the Camel Club series. I must say: the trouble that Oliver Stone manages to find himself in book after book is just amazing! He might have been on the run in this installment, but no one with luck like Oliver could have ever ended up in a town like Divine, Virginia! I must admit when the entire Divine storyline began, I was confused. I didn’t understand where in the world Mr. Baldacci was going. But in the end, I really enjoyed the storyline. It made the book so much more believable. I loved the introduction of a couple of new characters who could possibly make an appearance in the next book (and possibly more books?). I will be very interested in knowing what happens between Oliver and Abby. I have devoured this series these past couple of months. The latest book, Hell’s Corner, is available at my library (with a small waitlist), but I have vowed to read only from my TBR pile until April, so it will be a while before I can get to the next one in this series, but I’m axiously awaiting that! Definitely looking forward to more of the Camel Club!

To play along, just answer the following three (3) questions…

* What are you currently reading?

* What did you recently finish reading?

*What do you think you’ll read next?

I feel as if I started January out pretty solidly. I was able to finish 5 books this month.

Here’s a visual of the books I read (clicking on the individual books will take you to my review).

I read three Patterson books this month, something that I don’t usually do with his books. However, I am close to catching up with this series and I would like to get caught up with a series before I start a new-to-me series (and I’m itching to start a new series!) 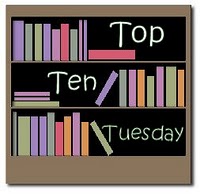 Top Ten Best Debut Books (of any year..just your favorite debut/”first from an author” books. If you want, you can focus on debuts of a specific year but it’s open to debuts of any year).

In order by debut year:

Today Jackie over at Housewife Blues and Chihuahua Stories is posting a guest post by yours truly! Please stop over by her blog and check her out and get a little more insight into who I am!!!